Yes, that’s right, ladies and gentlemen, because I enjoyed April’s ‘Carrie Bradshaw Month’ feature so much, I’ve decided to do a sequel. Only this time, it’s going to be bigger and better. The pictures are going to be shot ON LOCATION IN NEW YORK CITY!

That’s right, Charity Shop Chic is going global! :) I will be posting this series throughout this month, so stay tuned for more coming up shortly.

For my first trick I will be attempting to recreate a white jersey dress in the manner of this Halston Heritage number that she wears right at the start of the sequel. Of course, I am using my favourite source of recycled cotton jersey… old tshirts!

I picked up these two white men’s tshirts at the Cancer Research shop in Whitby for £3.50 apiece. One’s marked large, the other small, but crucially they are both completely plain. 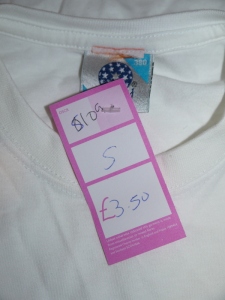 Now, let’s take a closer look at that Halston dress.

It’s cotton jersey with a gathered skirt and batwing top also gathered at the waistband.

I chose the larger of the two tshirts for the skirt – it helped that the material was a bit thicker. I just cut the bottom part off under the arms to use as the skirt. Very simple.

For the top, I cut the other tshirt as shown below. Neckline and hem portions were discarded. The centre section you can see below is the waistband. The V neck is cut lower at the front than the back. 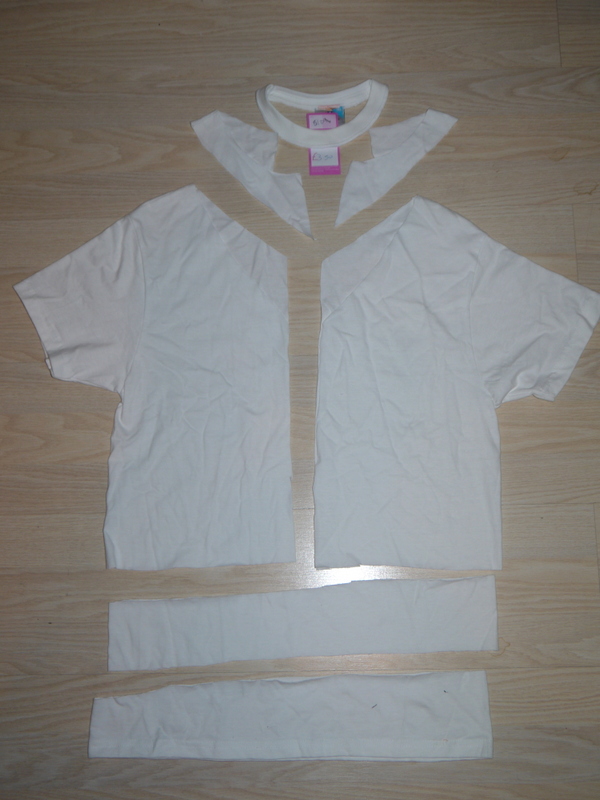 Here’s how they look side by side:

Since I don’t want the waistband to appear gathered, I cut it to my waist measurement.

I overlocked the bodice together, then pinned the waistband and bodice together at the sides and centre front and back, with the pins evenly spaced (I am trying to show this in the photo below). I eventually decided to catch some thin elastic in both the waistband seams. I don’t think this was 100% necessary, actually. The idea is to stretch the waistband while you sew so that it matches the length of bodice you are sewing to it. Then when the waistbands un-stretches, the bodice looks gathered. Repeat the process for the skirt.

It looked like this (below) but my calculations must have been a bit off because the bodice was way too long.

I also didn’t like that the sleeves and bodice joined at an acute angle. I wanted a smoother curve there for a batwing look.

So I cut it apart and made some adjustments…

…then sewed it up again. It looks OK, but I think I cut a little much off the bodice at the side seam because it isn’t as gathered as it should be. Oh well. 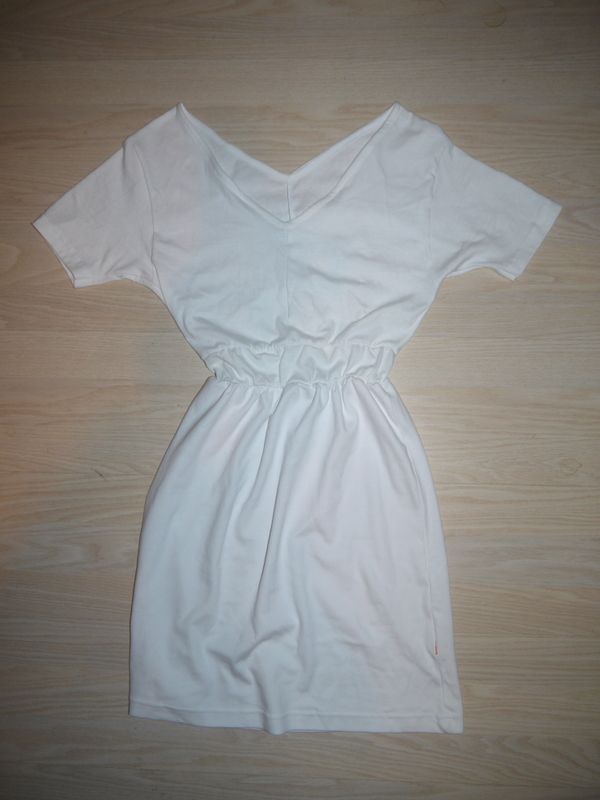 I finished the neck using a spare strip of jersey – basically I sewed it on like a facing, right sides together, then flipped it inside, turned it under and sewed/pressed.

And finally… I have to tell you about these shoes. I bought these babies in the Rainbow Trust shop in Upminster for £3. Imagine how delighted I was when I saw these! They are absolutely perfect for this outfit, and they are the right size as well. Score!

It’s not quite the same as having Carrie’s Louboutins, but there are a billion tutorials out there on the internet for spray painting the soles of your shoes red. I didn’t want to risk damaging the (otherwise perfect) shoes so I didn’t go through with it in the end, but may do in the future.

And then… I am so excited to reveal these pictures. We headed down to the location of ‘Heaven on Fifth’, Carrie and Big’s apartment in the first movie, to take some pictures. It’s at 1010 Fifth Avenue, pretty much right opposite the entrance of the Metropolitan Museum, but this building was apparently only used for the exterior shots, not the interiors which were done elsewhere.

Diehard movie fans will of course realise that this dress is from the start of the sequel, and they sell this apartment at the end of the first movie and move elsewhere. The location for their second apartment is not mentioned anywhere, so I wanted to use ‘Heaven on Fifth’ for the location of these photos as I really wanted to go there! It’s not a bad double for wherever their second apartment is. Unfortunately when we got there, the building was under scaffolding, which was a shame, but we managed to get a couple of great pictures anyway. Thank you to my photographer and partner-in-crime for the trip, A, who was extremely patient in taking all the pictures :) 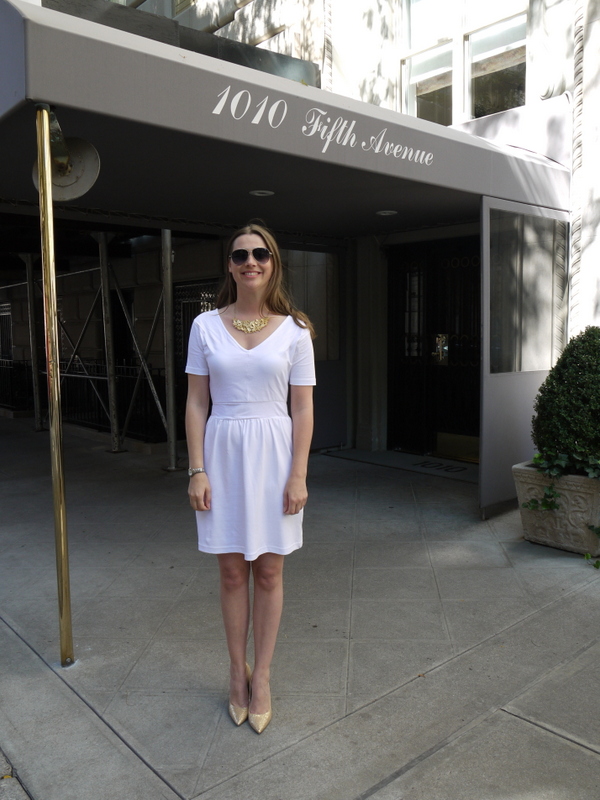 After that we headed to the Central Park Boathouse for lunch. It was the most gorgeous day and the sunlight reflected from the water onto the ceiling, which was beautiful. We had a wonderful meal dreaming about lunching with Ed Burns like in the movie 27 Dresses, which uses this location prominently. All in all, a great day!

PS. I should also add that the Boathouse is also in a SATC episode, Season 3 episode 18. In this episode, Carrie and Big are meeting at the Boathouse for lunch, but end up falling in the lake… thankfully we didn’t go that far in recreating the pictures :) 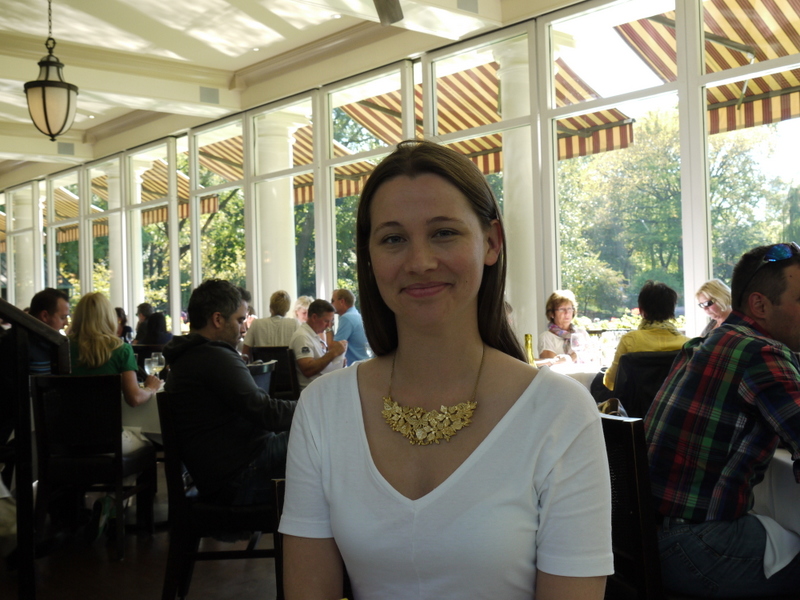