OK, I admit that I bought this garment as a challenge. It is hands down the ugliest garment I’ve ever seen. It would be difficult to conceive a garment that had less potential than this 100% polyester monstrosity that looks like something Pat Butcher might wear on laundry day. 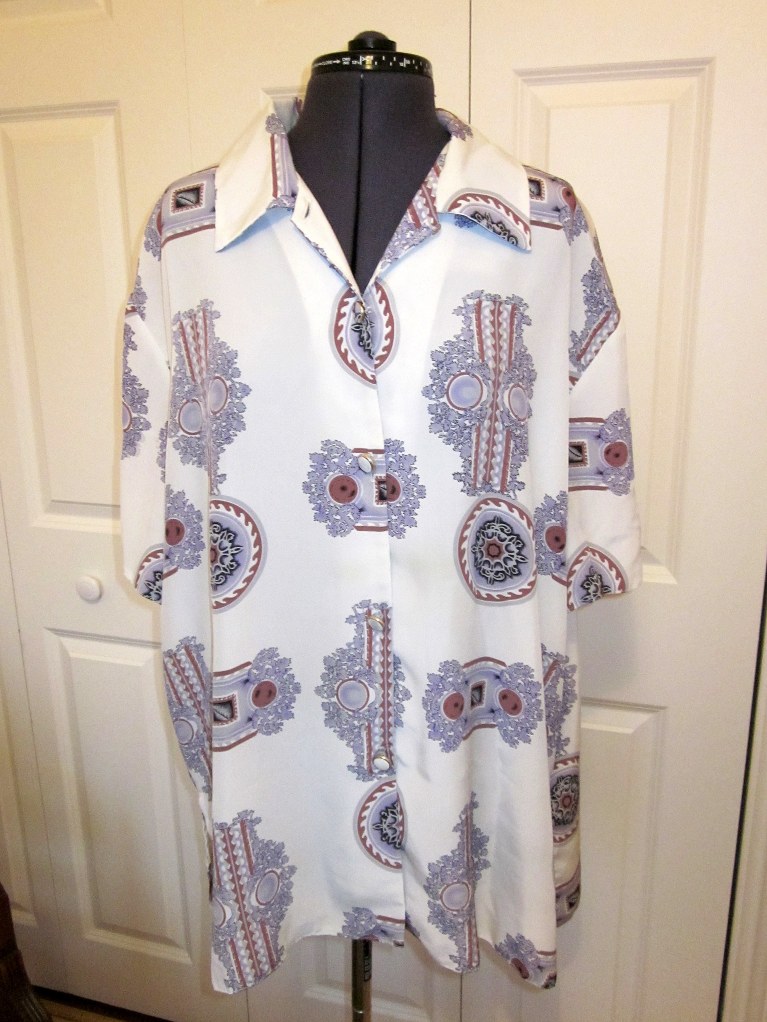 Features of this blouse include particularly heinous self-covered buttons and a grecian-inspired print in colours which can only be described as washed-out pot-pourri lilac, chicken balti brown, mild snot and black. This came from Barking PDSA and cost £2.75. 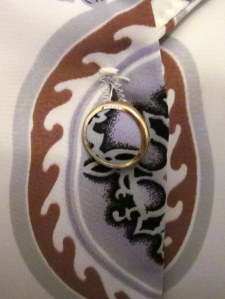 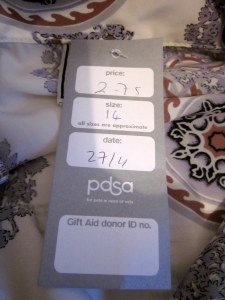 I thought it best to stick with the grecian theme and decided a grecian-style top was probably my best bet. First step was to make a ‘pattern’ of sorts. The top part of my design was a bib section front and back (yoke?) under which there was a gathered section that did not require any closures (just as well, since the self buttons went straight in the bin, and I don’t think they make zips in chicken balti brown). I began by deciding roughly how wide the yoke should be and drawing the rough shape that I wanted, with help from my dummy. I used newspaper for this – using the fold of the broadsheet helped me get it symmetrical! Added seam allowances and tried it on the dummy, adjusting where necessary. Don’t forget to ensure you’ll be able to fit your head through the hole :-) 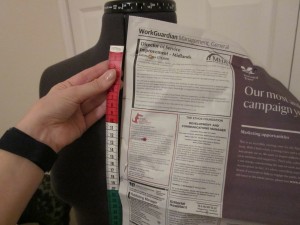 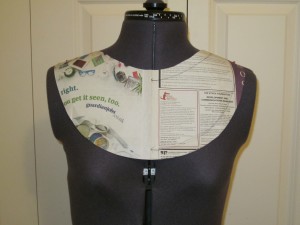 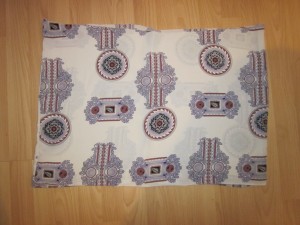 From the remainder of the material, including both sleeves, I cut 4 yokes (2 visible, 2 for the lining). I also cut 2 yokes from some heavy white material I had in stash which I used as underlining for 2 of the yoke pieces… and stitched it all together! 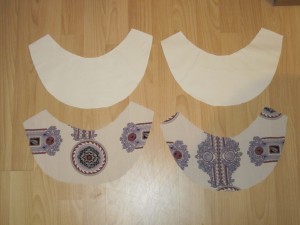 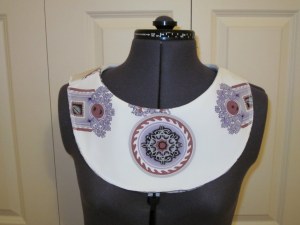 To sew the bottom half onto the yoke, I needed to trim it to the right shape. This was a slightly roundabout way of doing things but here goes: I decided where, on the yoke, the bottom section would hit, ie, where the armscye would begin (marked in the pic below by 2 pins). These two points are designated “a” and “b” for the purposes of this explanation. Then measured the vertical distance between the pins and the seam along the bottom of the yoke (red measuring tape), which for the purposes of this explanation, is called “x”. 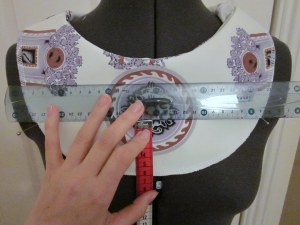 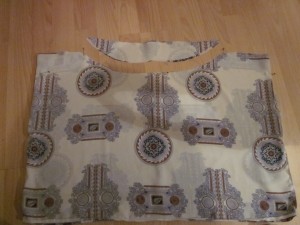 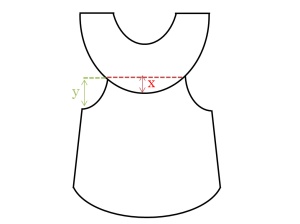 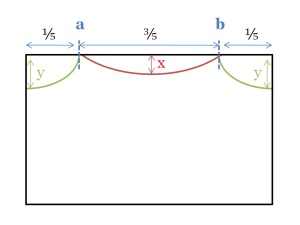 I arbitrarily decided the distance from a to b should be about three-fifths of the width of the bottom section of material. After a bit of head-scratching, I cut a curved segment of material out (photo above) between points a and b with a maximum depth of x at the centre front. The bottom section was then gathered between point a and b and sewed on to the yoke, front and back. Once this was done I tried the top on to decide on measurement “y”, the armscye depth and cut out the shapes accordingly. 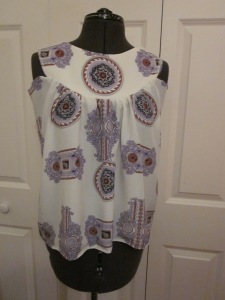 All that was left to do was to finish the armholes and stitch the lining to the long curve of the inside of the yoke by hand. I didn’t even need to hem it since the original hem of the blouse was still in place :-)

Here I am modelling my new top.

If I were to make this again, I’d rethink the idea of putting the round black motif at the centre front of the yoke, in retrospect I would have chosen a part of the pattern which is less conspicuous. I would also try to source some sew-on gems and cover the yoke in those!

This weekend I went with my friend J to the V&A to see the “Imperial Chinese Robes from the Forbidden City” exhibition, which was stunning, though it was the last day of the exhibit. It was all about the Chinese emperor and empresses robes from the Qing dynasty (1644-1911). There were some incredible examples of embroidery and frabrics. I ended up buying the book related to the exhibition plus a souvenir – a piece of Chinese-style frogging which may be coming to a project sometime in the near future! 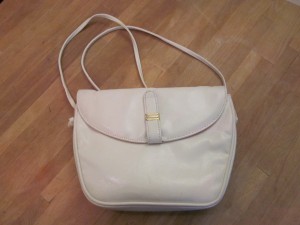 For the trip to the V&A I styled this top with a black cardi and an 80’s handbag I picked up in the St Francis Hospice shop in Romford for 50p. Yes, 50p! 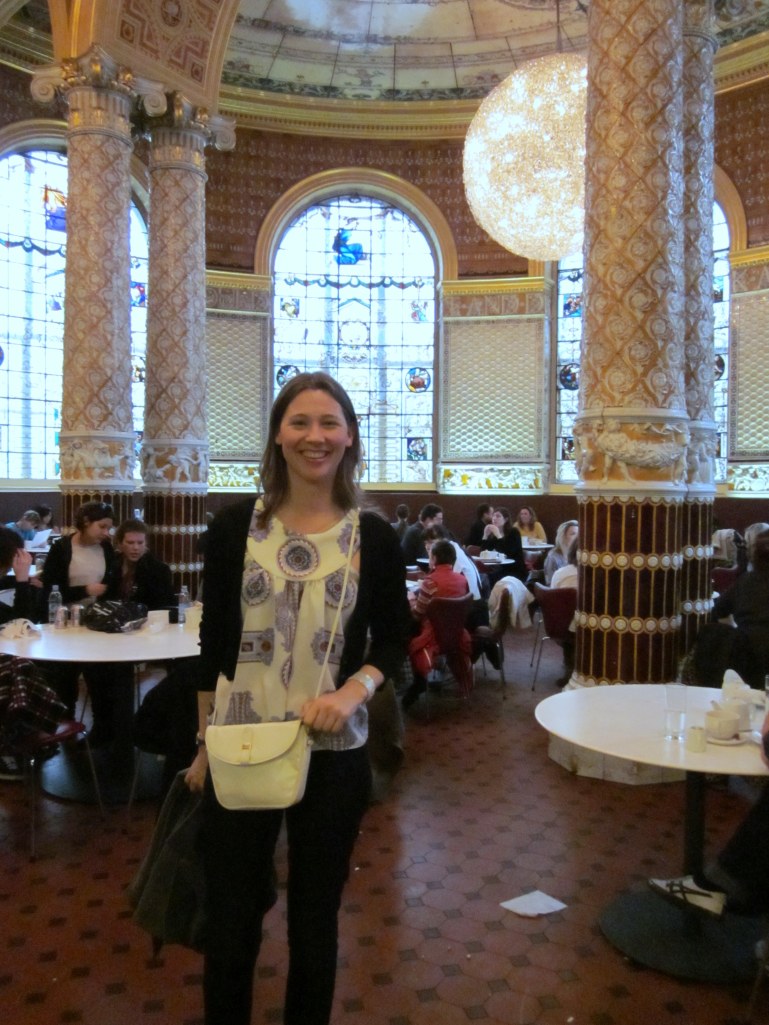 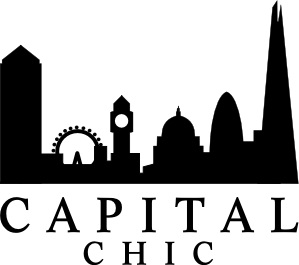 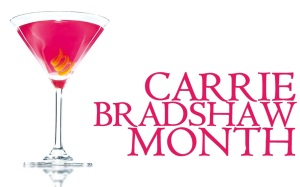 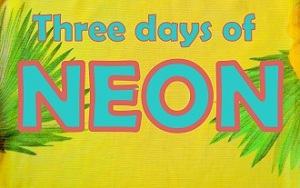