Thinking about a holiday wardrobe for a trip to the tropics I got very excited about making summer clothes despite it being a rather chilly November here in London. First on the list was a shirt to keep the sun off my shoulders while sailing.

I picked up this XL mens’ Hawaiian shirt on a recent trip to San Francisco. It actually came from the Goodwill store in Haight-Ashbury. I am happy to report that this store has a great selection of mens’ Hawaiian shirts, in case you’re in the area :-) 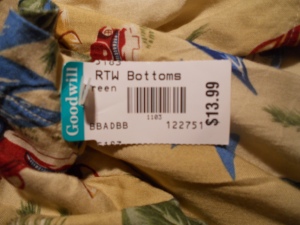 Slightly confused by this label as it certainly isn’t RTW bottoms and I didn’t pay $13.99 for it. As I recall it was around $10 (around £6.40 at the time of writing). It’s made from 100% Rayon making it both lightweight and breathable. I also love that it’s reminiscent of everyone’s favourite Hawaii-based private detective, Magnum PI, without being too garish – I love the slight retro feel and the cars remind me of Cuba… Check out that moustache!

As a men’s XL it needed size adjustments as well as a new style. Firstly I deconstructed the garment a bit, cutting off the sleeves and chopping from left to right at armscye level. I actually measured the top section from the shoulder vertically downwards to make sure it coincided roughly with my underbust. 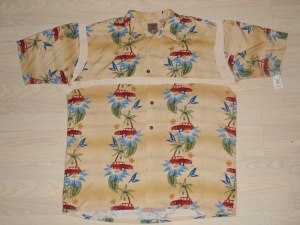 For the yoke, I measured (with difficulty) around the widest part of my shoulders. I estimated the finished shirt would need to be half this circumference in width in order to get it on and off over my head easily. Then it was simple enough to cut the required amount off, shaping a bit to make some armholes.

Here’s how the yoke looks right side out. Whilst initially worried about the amount I cut off the shoulders, since the shirt was meant to be shielding me from the sun, I was happy with the amount of shoulder coverage after I tried it on. You can see in this picture that I basted along the centre front under the buttons just to keep it closed while working on it. I finished the armholes by doing a very narrow hem (not shown).

For the bottom half of the shirt, I folded the remainder inside out and trimmed it off in a straight line – you can see from the ‘before’ pictures above that the back was a bit longer than the front. Then I stitched down roughly where the centre front was, leaving the buttons/buttonholes in the seam allowance, and cut the excess off to leave a loose tube of material.

Here’s the centre front of the original, which will become the centre back of the new shirt. 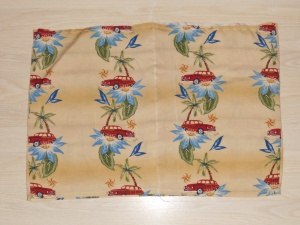 The final step was to gather the tube all the way around and attach it to the bottom of the yoke.

After I finished I tried it on, and decided to add two ties under the arms that can be tied at the back to make it fit a bit snugger, or a bit looser, depending on the temperature. These were just cut from off cuts of the sleeves.

Here I am modelling this shirt on holiday. The pictures were taken off Norman Island in the British Virgin Islands. I am happy to report that the shirt was both very comfortable to wear and a very efficient sun shield.