Confession time… it’s been more than 6 months since my last blog post. Hopefully y’all haven’t missed me too much during my unplanned break! I have one more refashion from my US trip that I want to share before I show you some new stuff, though quite frankly I cannot believe it’s been 9 months since I was there. Looking back through these photos made it seem like yesterday. Anyway, here goes…

After the success of my Epic Yale blazer, I wanted to have a go at applying the tie-as-bias-binding technique to another type of garment. This one isn’t a patch on the blazer (no pun intended), but I’m showing you it anyway as it was quite interesting and the photos we took on location were just fabulous.

This one was intended for our trip out to the beaches of Cape Cod, so I wanted a preppy/sporty vibe. I picked up this cream cardigan in the PDSA shop in Orpington (if memory serves…) for £4.99, thinking it looked a bit like a cricket jumper. It’s actually a rather unfortunate polyester item which has clearly been treasured by an elderly lady in its former life. It’s ugly, but the fit of it isn’t too bad, if you like oversized (I do). 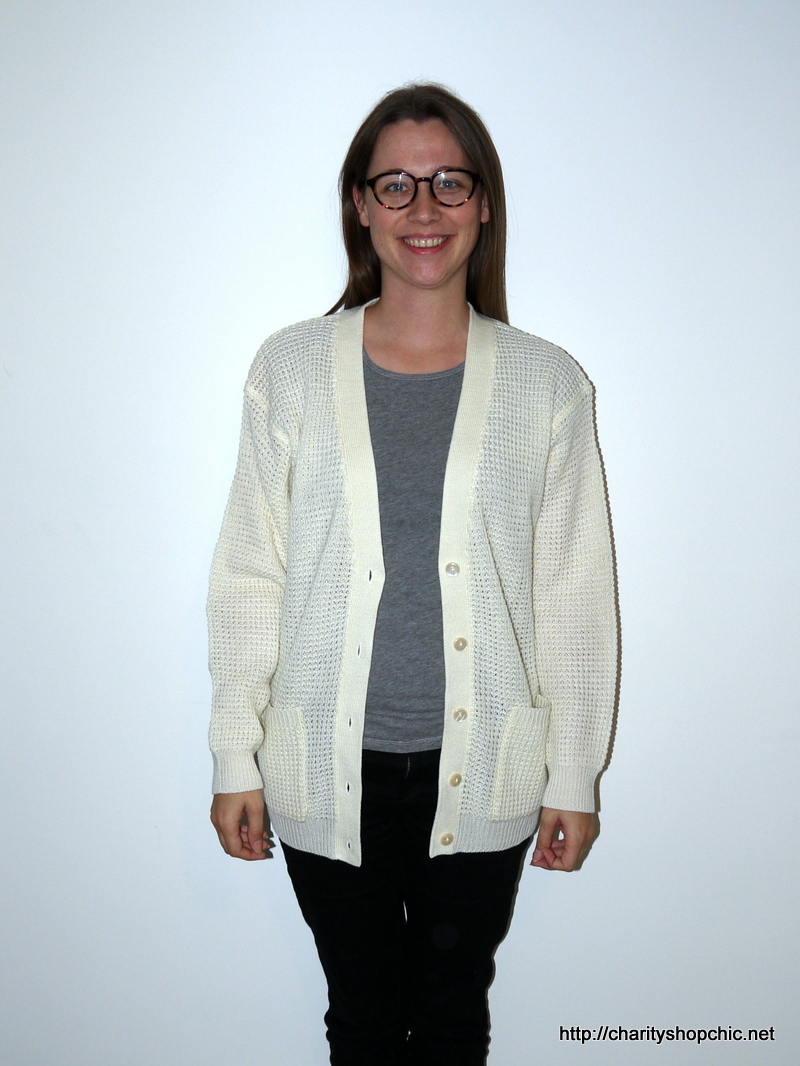 I got this tie at the same time as I got the one I used for the blazer, at the Save the Children shop in Orpington. An amazing find, as it was exactly the right colour, and ties were half price (I think, £1). Unlike the other one though, this is completely synthetic, which made it a good match for the cardigan. 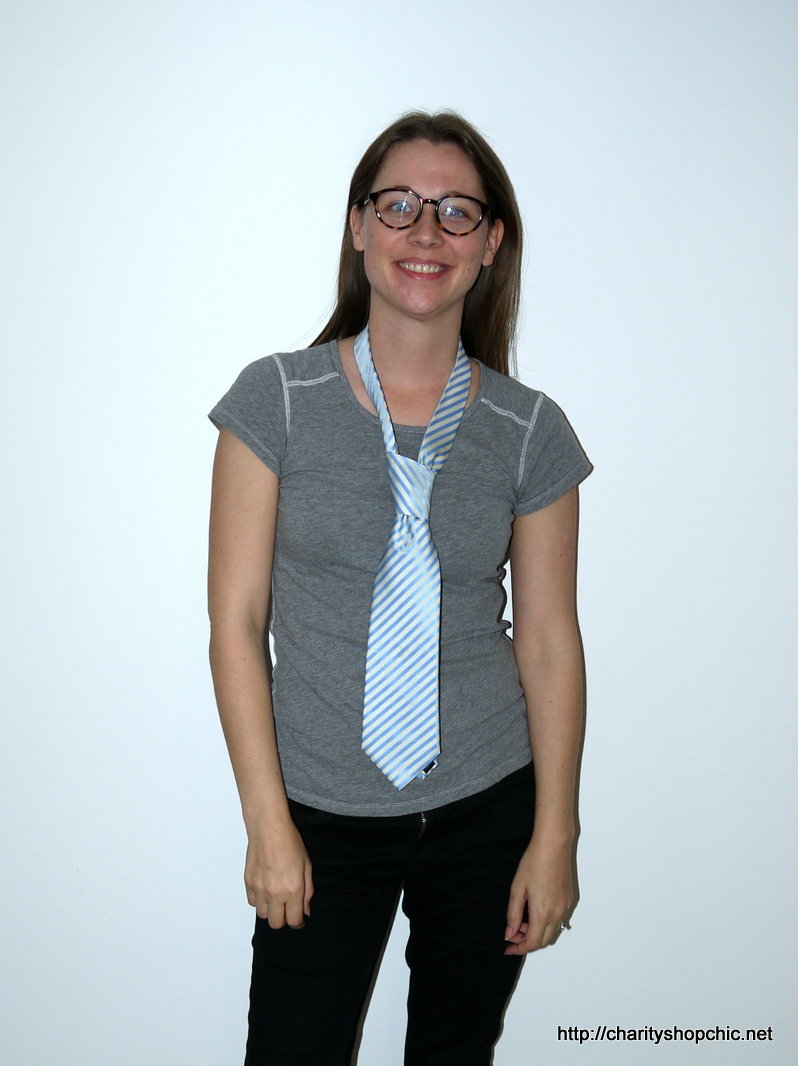 Working with a similar idea to the blazer in mind, I started by disassembling the tie.

Here’s the inside of the small end.

Here’s the inside of the big end.

Both ends were nicely mitred but of course, it all had to come out.

I had to cut the tie into strips (not as many, nor as thin as for the blazer), and join them together to make one long strip. Note the non-matching stripes at the join made in the factory. 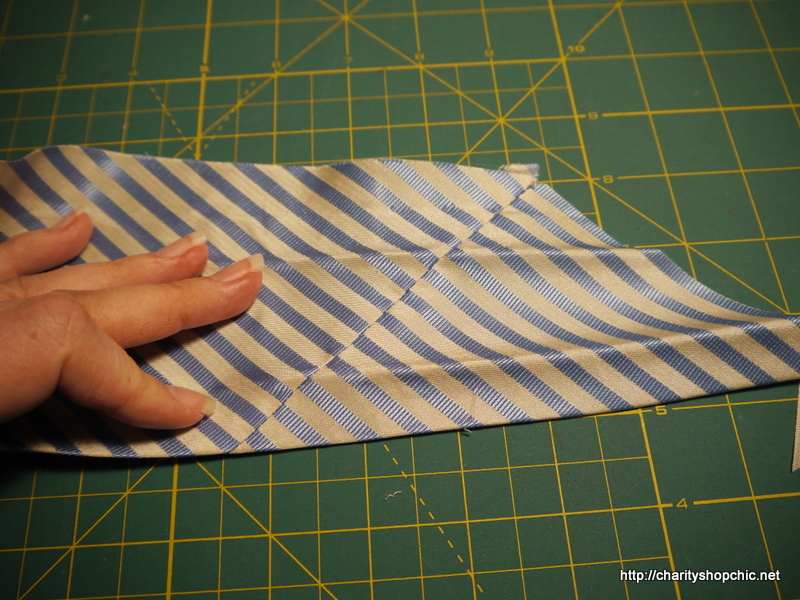 Note the matching stripes in my join ;-)

I cut the buttons from the cardigan ready for the application of the tie-binding. 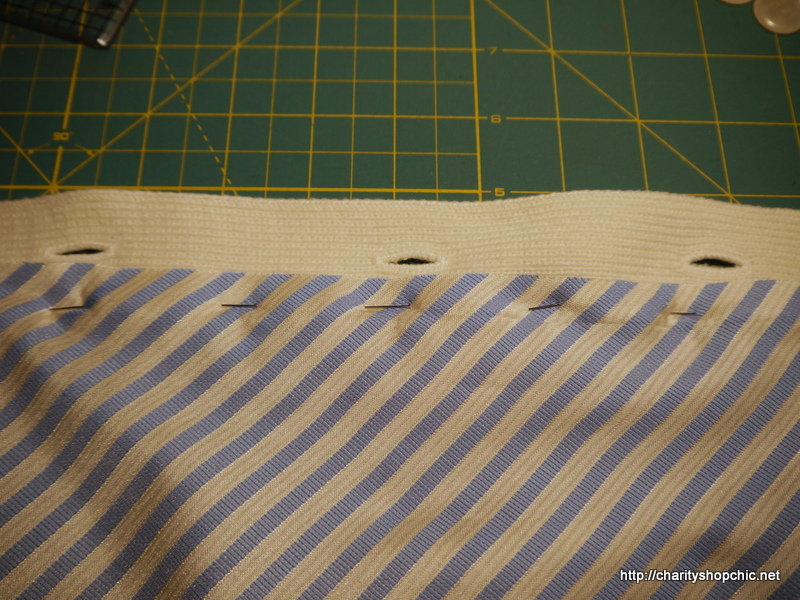 I actually stitched it from the other side, so I could see the edge of the placket and get as close to it as possible.

I also made a corner at both ends, by machine. 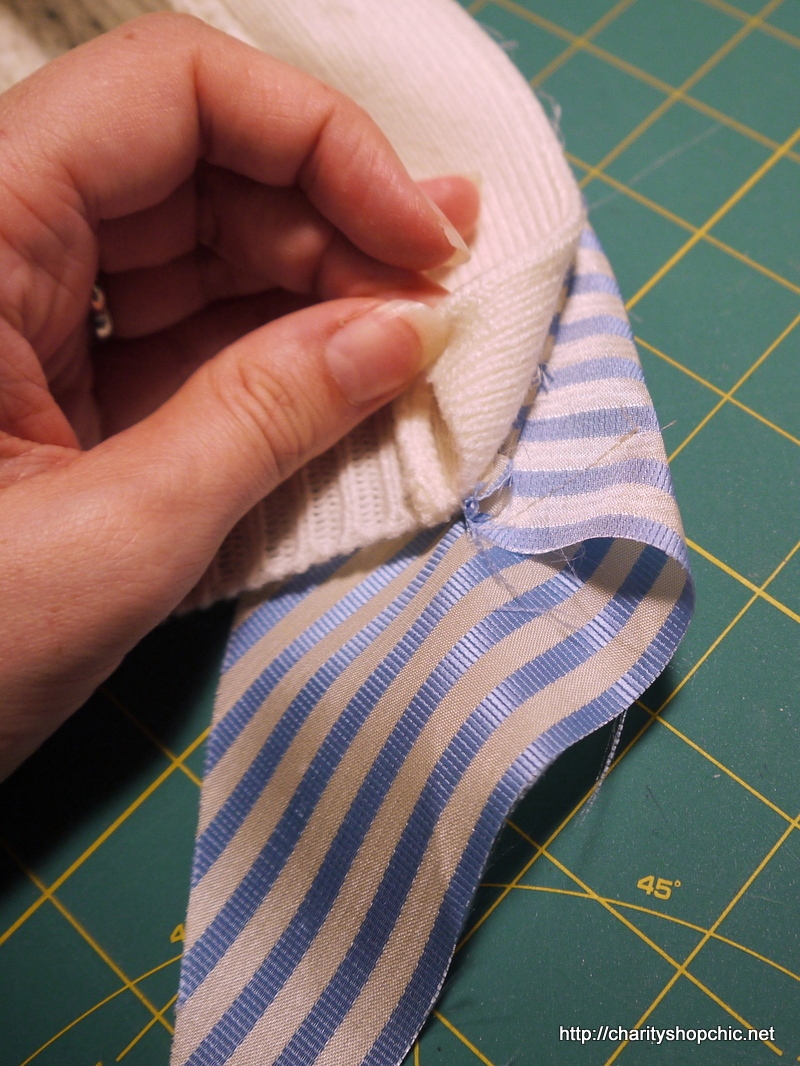 After several unsuccessful attempts to stitch in the ditch to affix the inside of the binding, I gave up. The stretchy knit of the cardigan combined with the totally different stretch of the bias binding was a nightmare. I ended up hand stitching this all the way around the inside, and it looks fine.

I then had to cut buttonholes in it, and reapply the buttons. Again, I toyed with the idea of a machine made buttonhole, but it would have been on top of the original buttonholes which were still there. I opted for hand stitching, settling on a kind of blanket stitch, which even by my own low standards looks absolutely appalling. Definitely not the way to go, but the flight was the next morning and unfortunately I ran out of time to come up with something better. What would you have done?

Still feeling like something was missing, I did however find the time to construct a small badge from tie offcuts.

I hand stitched it to the cardigan pocket as a nice finishing touch.

Here are the pictures of me wearing it. Despite it being late October, our time in Boston and Cape Cod was characterised by a glorious heat wave which made it surprisingly summery.

I had imagined a wintry beach photoshoot with the wind whipping my hair up into a mess. Instead we took a few leisurely photos in the glorious sunshine.

Here’s one with the badge visible. You can barely see the buttonholes, which is just as well. 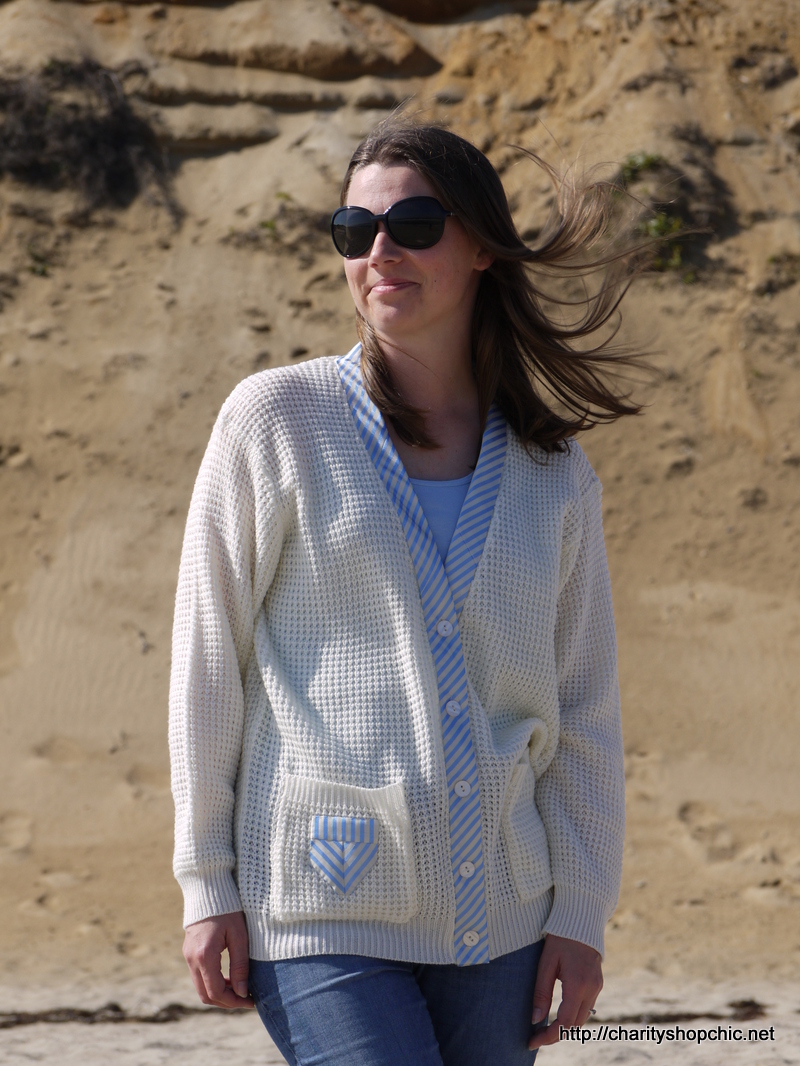 I don’t think it could possibly have been better weather. The fresh air after the long drive was exhilarating, and the sunshine replenishing. 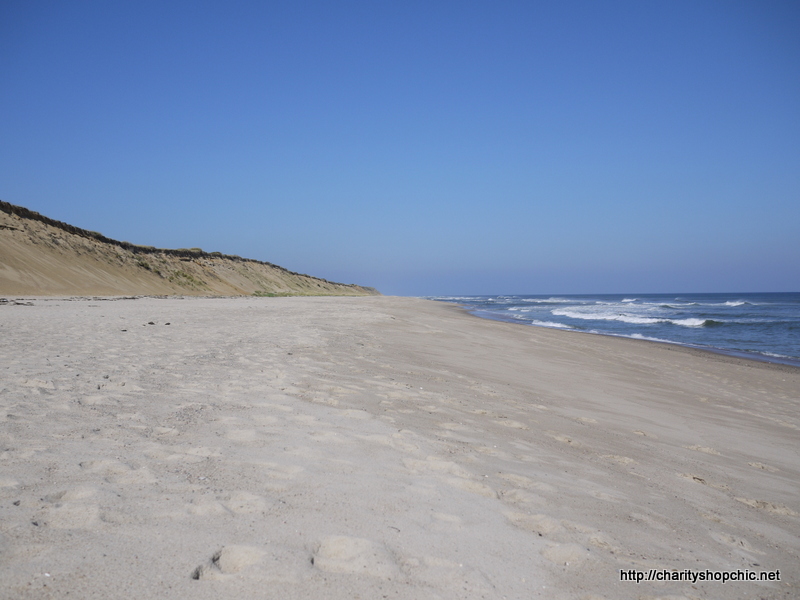 Yes, this happened. It was chilly in the sea, but it had to be done! Overall, a great memory, and a shame it’s taken so long to share.

Follow my blog with Bloglovin, if you want to.