I’ve been wanting to try another dye project since I dip-dyed a white shirt last year and it was a runaway success.

And then I saw this picture a few weeks back of my favourite fashion blogger, Atlantic-Pacific, modelling a Tory Burch dress. It’s on sale for £278 at the time of writing.

Oh yeah, and Reese Witherspon has the skirt version.

Now, when I saw that dress, my first thought was: SHIBORI. Shibori is Japanese traditional tie-dye which is traditionally done using indigo dyes. There are many techniques, including folding, binding, twisting, clamping and sewing. There are some great examples on the web if you want to read more about it. Ginger over at Ginger Makes did a Shibori class with some of the NY based sewists which you can read about here. Seeing those pictures really whetted my appetite for what might be possible. Erica over at Recycled Fashion also tried this recently and made a beautiful T-shirt. And for more on dying… Sallie Oh does some incredibly inspirational things with dye – like this one which looks a bit shibori-like. She has a great dye tutorial, with more examples, here as well.

Sheets are perfect for dye projects. This double duvet cover came from the Scope shop in Lewisham (£6). It’s actually 50% cotton, 50% polyester, so it will still take the dye, but the colour won’t be as strong as it would have been with 100% cotton. 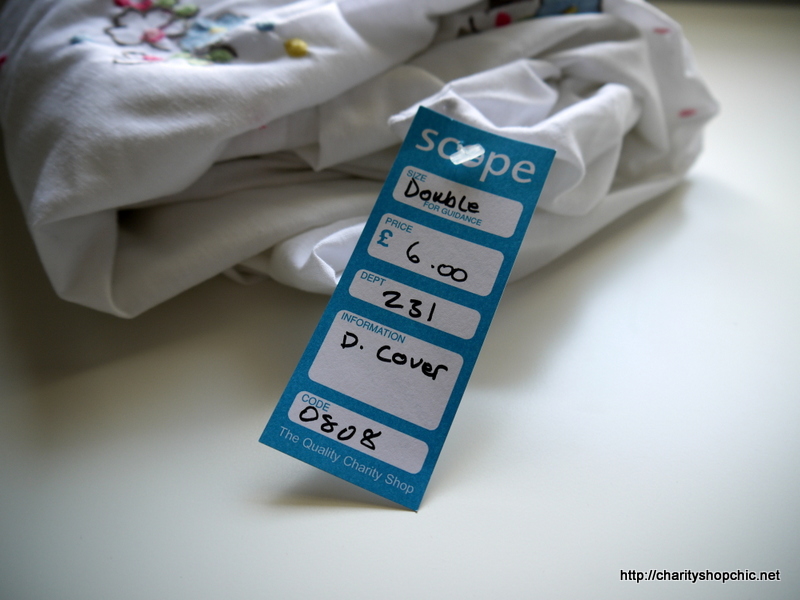 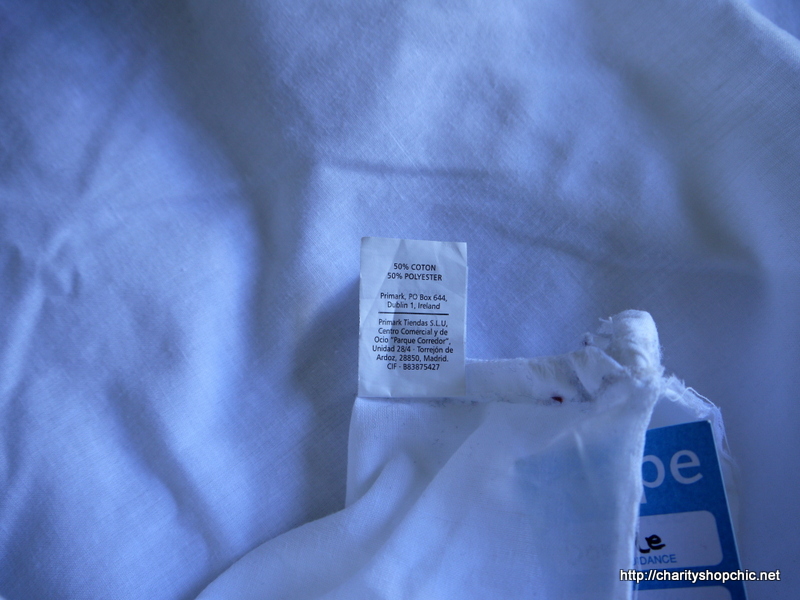 I’m using Dylon hand dye – same as the dip-dye shirt – but in Ocean Blue this time. 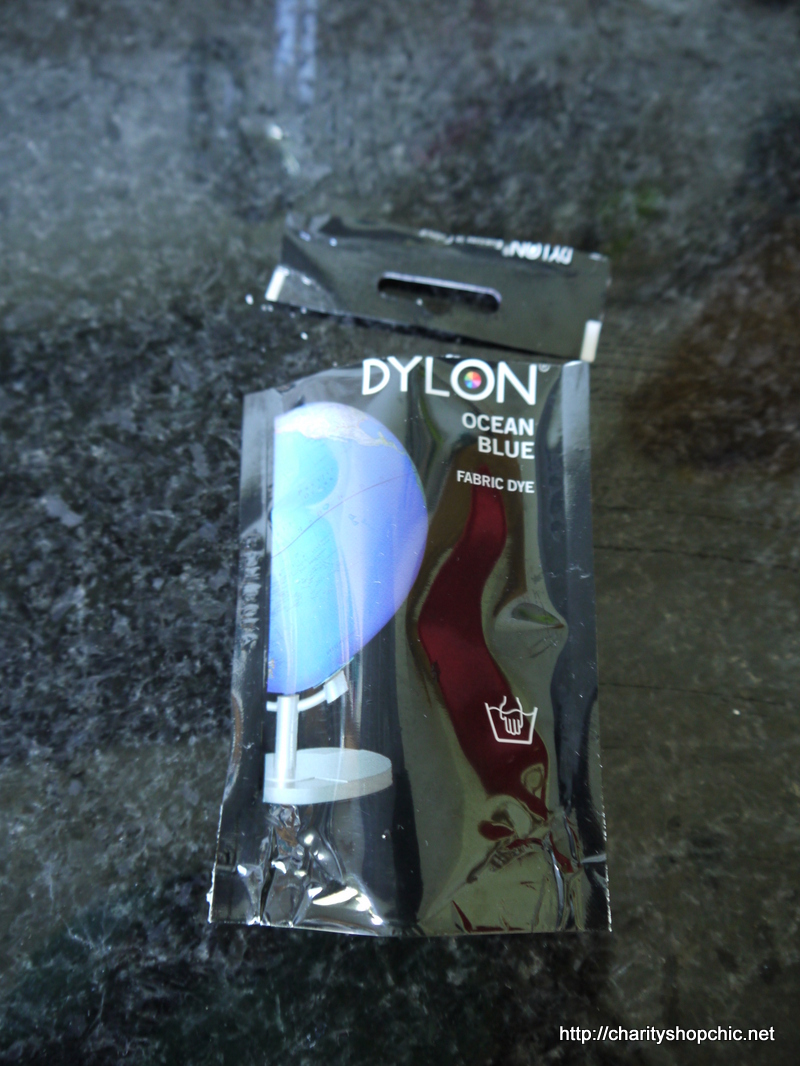 Each packet dyes up to 250g of fabric so I weighed my duvet cover to work out roughly how much I should be attempting to dye. In the end I used up about two thirds of the back of the duvet cover (which wasn’t embroidered), or about 300g of fabric. I figured that some of the sections would be left white and therefore I could get away with using more! 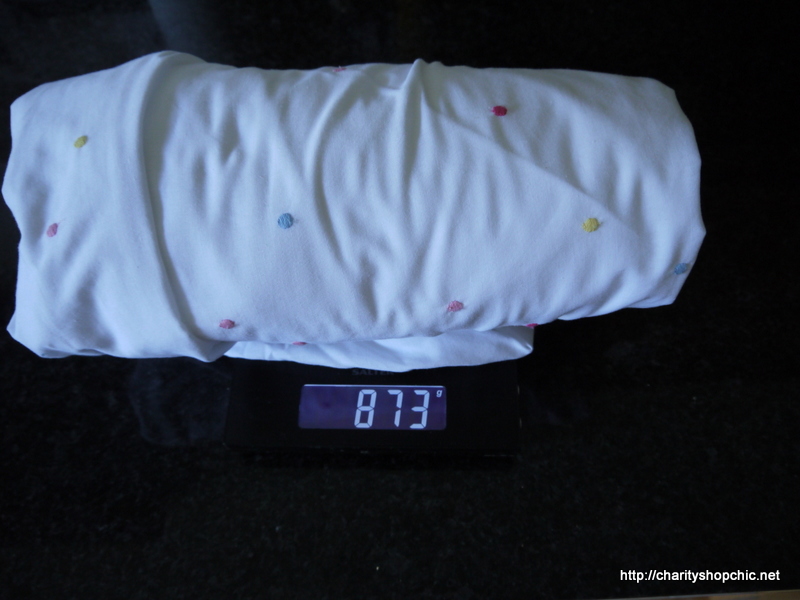 I tore up some pieces, checking that they were wide enough to take my front and back bodice blocks. I did two pieces for the bodice, four for the skirt and another two to experiment with.

Following the instructions on the packet, I dunked my fabric in water and rung it out so that it was wet but not dripping. This helps the dye coat evenly.

To emulate the Tory Burch dress, I had to accordion pleat my pieces in both directions. Since my bodice pieces would be used ‘landscape’, while my skirt pieces would be ‘portrait’, I had to be sure to pleat two the opposite way to the remaining four (this will make more sense when you scroll down and see the finished dyed pieces).

I ended up with six little wet parcels. (I’ll show you what I did with my experimental pieces another time).

Following the directions on the dye packet, I dissolved it in warm water and added the salt, popped in my parcels and left them there, stirring occasionally, for about an hour. WEAR GLOVES AND AN APRON if you try this, folks!

The parcels came out nice and blue!

And then… the moment of truth…. 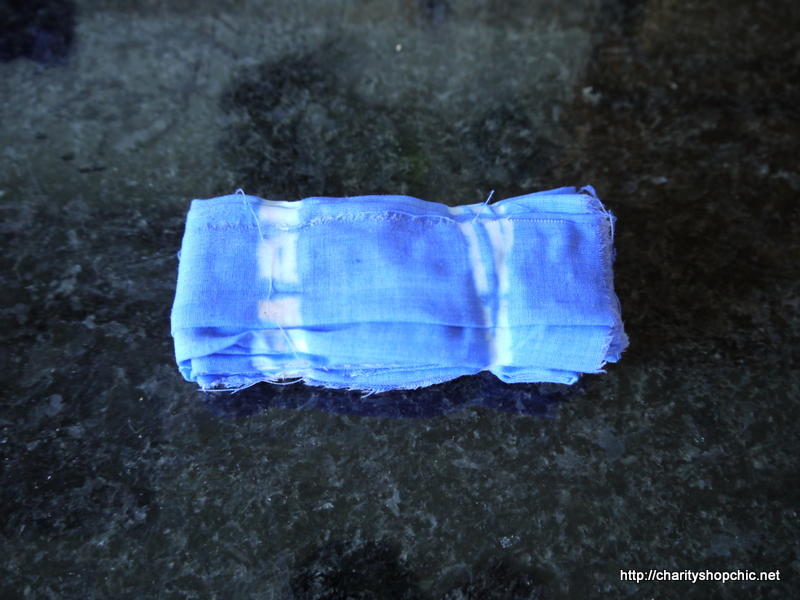 To say I was delighted with the results would be a bit of an understatement! I could barely wait for them to dry before I started sewing! 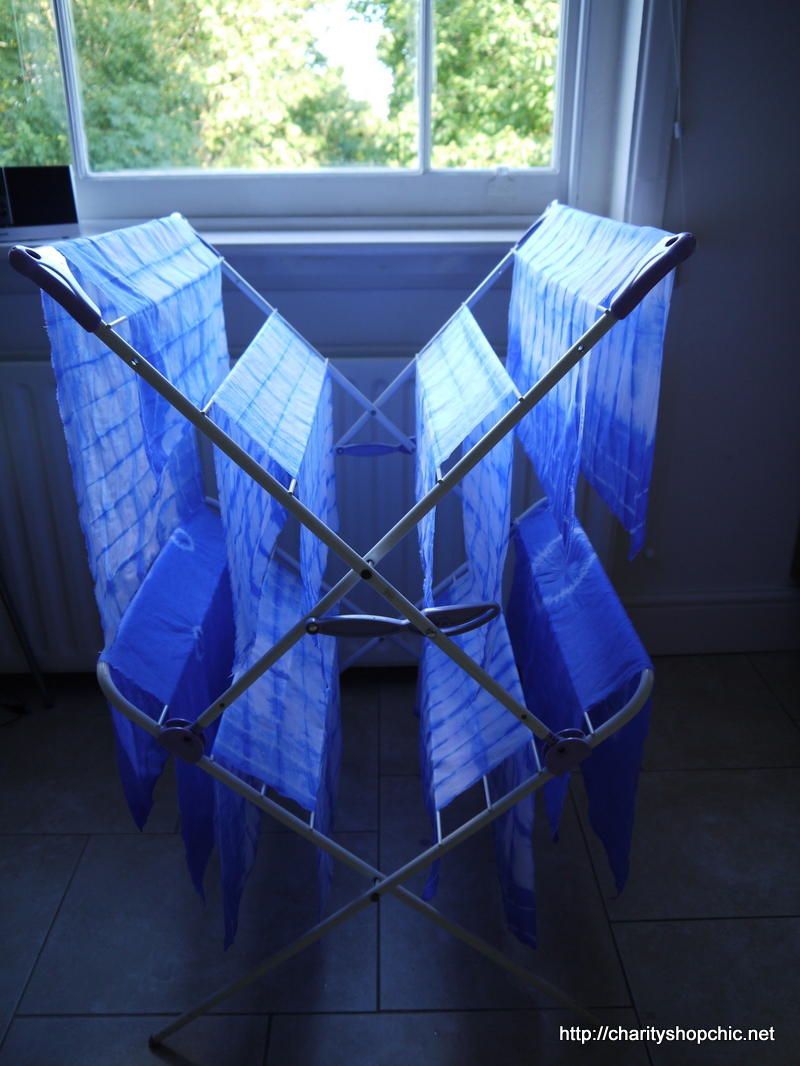 Here’s what I meant by ‘portrait’ and ‘landscape’. 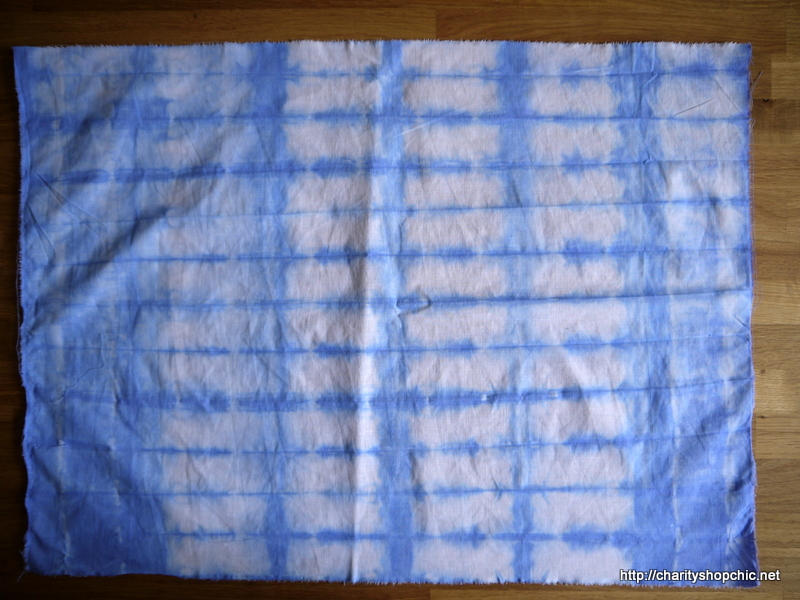 And now… to start sewing! The bodice was just my block, with some room to overlap at centre front to make a button placket.

I underlined the bodice pieces with some more of the sheet to make the white look really white.

The collar pattern was borrowed from Betty Draper and cut from scraps of the bodice pieces. There wasn’t enough, so both underside pieces are plain white.

From the scraps, I also cut a couple of vaguely sleeve shaped cap sleeves.

Here are some more in progress shots. The skirt was sewn together and then pleated on the blue lines to complement the pattern. 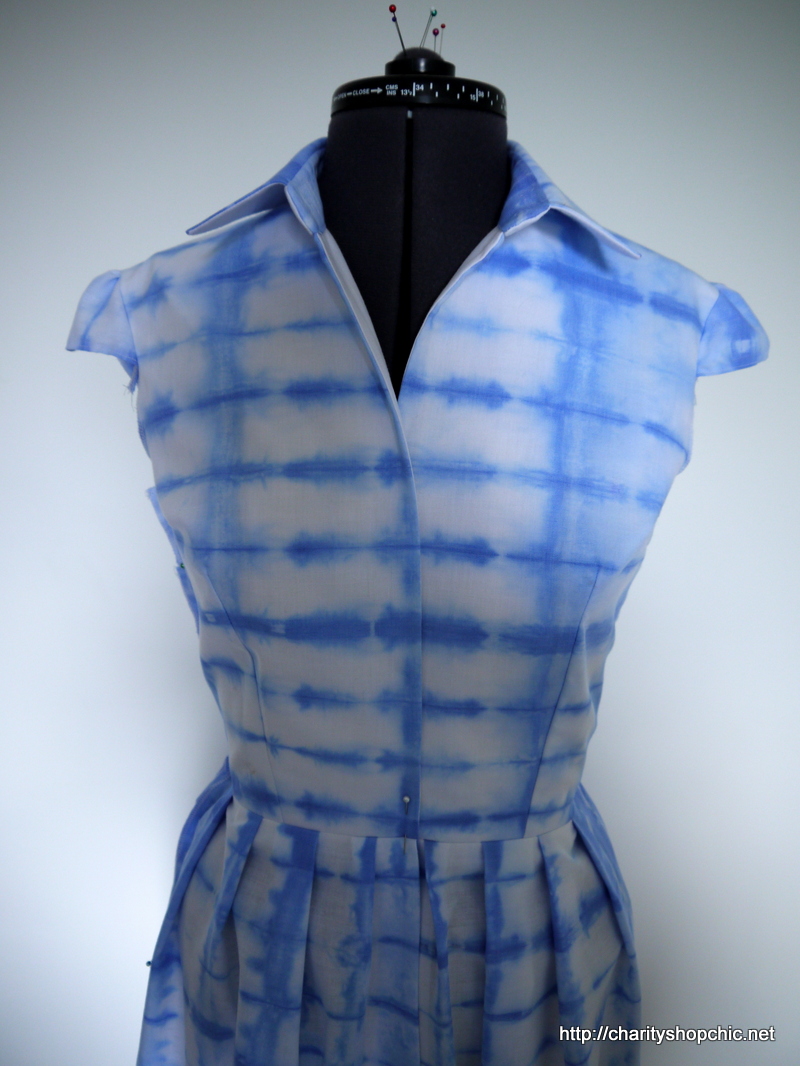 Closure-wise, there’s a zip up one side. The centre front is held together by sewing through the buttons and and all the layers in one go. You’ll see from the pictures below that I used 7 of the original buttons that were cut from the original duvet cover – they are the perfect size and are completely transparent.

Overall I think this is a dead ringer for the original garment so I’m pretty happy with it! 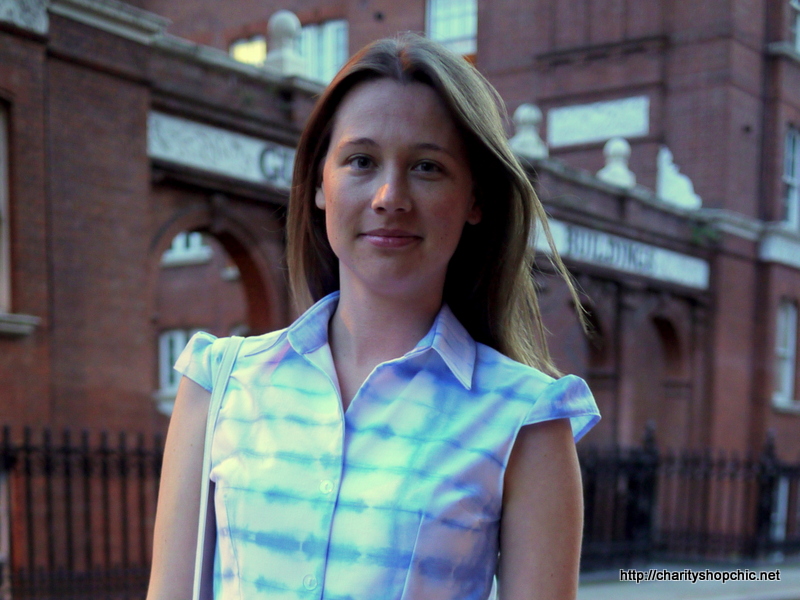