I hope you’re as excited to talk about my fabric as I am!

I bought my final fabric from Misan Fabrics in London (unfortunately they don’t have stock online so I can’t point you towards the exact fabric). It’s pretty special. It’s a cloque jacqard, mixed fibres. Parts are white, parts are off-white. Parts are shiny, parts are not. Parts are rippled, parts are flat. Hopefully you can see what I’m talking about below.

The whole thing is textured. Quite unusual for a bridal fabric, but I love it. 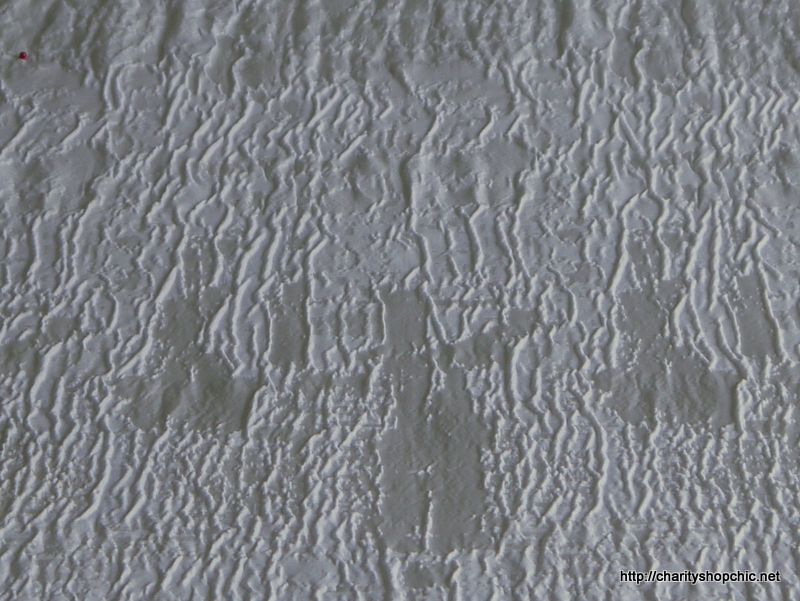 I transferred my adjustments from the dress muslin to my paper pattern and started playing with the placement. Right up until the moment I laid a long length of the fabric out on my kitchen table, I’d thought of it as abstract, which of course it isn’t. There are clear repeats in the pattern forming ‘bands’ of similar blobs all the way down. This presented a dilemma; whether to cut the pieces to preserve the ‘bands’ all the way around the dress, or whether to do something different? To make things worse, I had just over 6 metres of fabric and was cutting around two fabric flaws/stains. After much placing and pinning, and replacing, and repinning, I flipped some of the pieces upside down so that there would be no band effect on the dress, to try and make it look as abstract as possible. It took a few goes pinning it all so it would fit and avoid the stains at the same time (and my table is only 2 metres long), but eventually, I took a deep breath and started cutting.

Being white and off-white, I was worried that the fabric might be a little transparent, and also knowing the skirt had to create a clean line over all those net ruffles… I made the decision to underline, and I’m glad I did. I had a pile of old white poly cotton sheets to work with and they did really well adding stiffness to the fabric, though they did add a reasonable amount of weight.

I hand basted the underlining to the dress fabric in the seam allowance of all the pieces (not a small task).

I also reinforced the neckline, armholes and zip opening with strips of silk organza.

After sewing the panels up, it was really starting to come together.

Then came the task of finishing the edges.

The first thing I did was to add extra reinforcement at the point of the V. I used a square of silk organza. 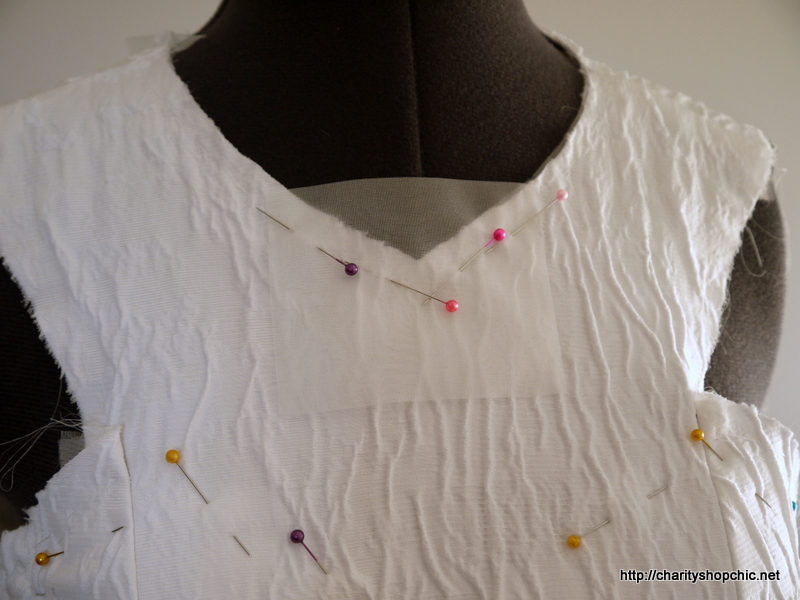 Here’s how it looks after pressing – pretty neat!

I pinned the seam allowances of all the edges under until I was happy that they were even. 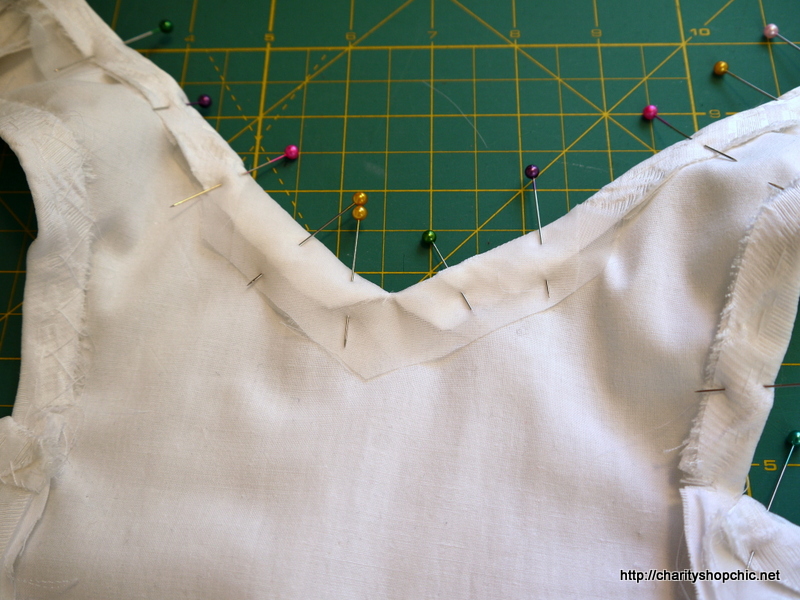 Then I catch stitched all the seam allowances to the underlining and pressed.

I was really pleased with it at this point because it was really starting to feel like a real dress and the end was in sight! 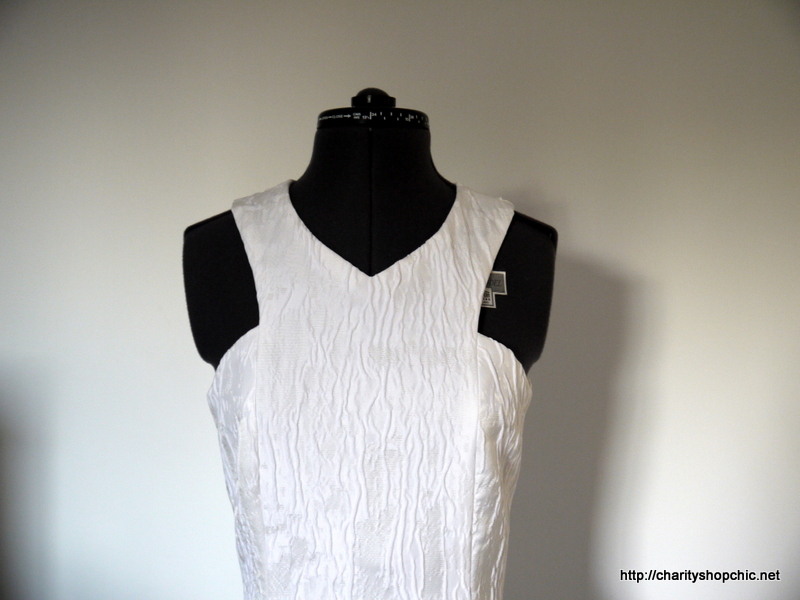 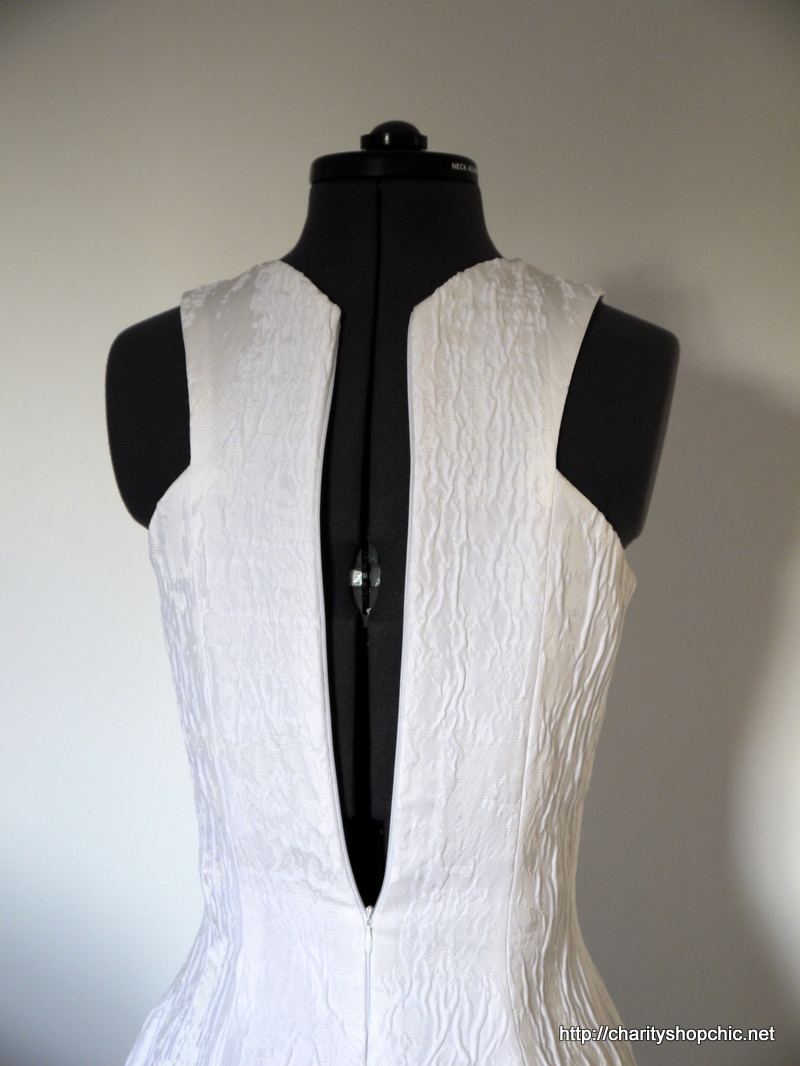 To line the top part of the bodice, rather than cut a lining from my pattern pieces, I draped it from a scrap of lining material, being careful to maintain the grainline of the lining on the vertical.

I sewed it to the dress with tiny stitches. 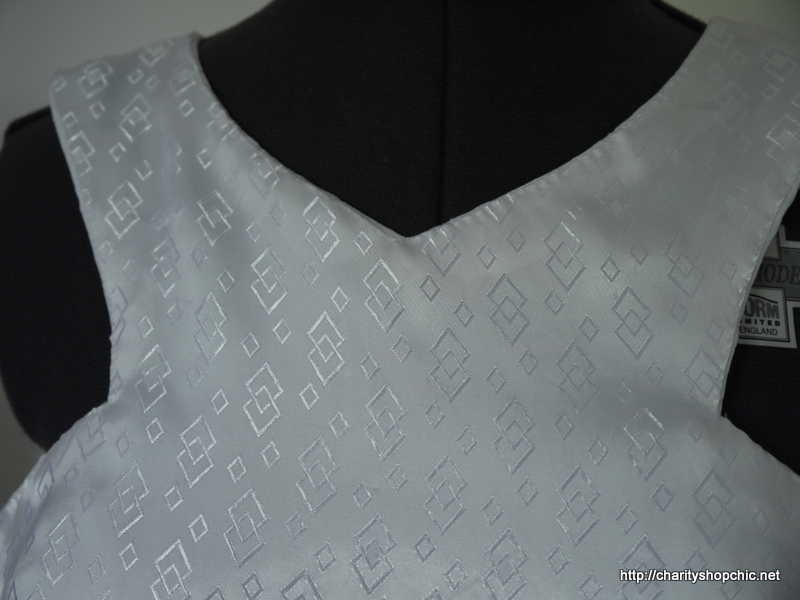 Same at the back!

I tried the whole thing on over the corselette to determine the exact position of the corselette relative to the dress. Marking the position carefully was critical and I took it on and off a few times to check. When I was happy with it, I put the inside out corselette over the dress and trimmed the lining to reach it.

I sewed the bodice lining to the corselette with the same small stitches.

Here’s the whole thing the right way out… quite a few photos, just because I can ;-) I think you can see the fabric better here as well.

Just one more post to go before the big reveal! Stay tuned to hear about my veil.